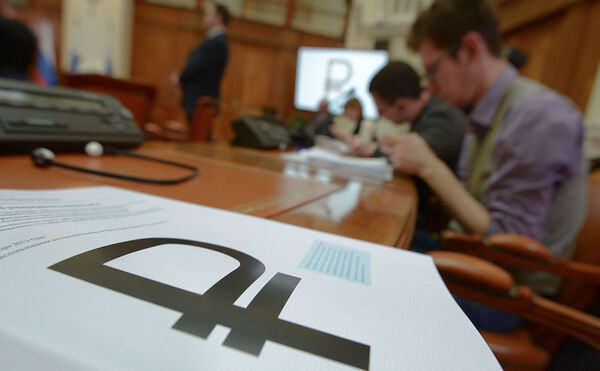 The Bank of Russia will study the need to create a digital currency, which will become the third form of money in Russia along with paper and non-cash funds. The new ruble can be issued as a digital code

The Bank of Russia will study the feasibility of issuing a digital ruble, which will circulate in parallel with cash and non-cash rubles, follows from a public comment report issued by the regulator.

The decision to issue a digital ruble has not yet been made, the report emphasizes. But, according to the Central Bank, an active study of the issue from the economic and technological points of view is already needed. By December 31, 2020, the regulator plans to receive feedback from experts and market participants on the initiative.

How the digital ruble differs from non-cash money

The digital ruble is a digital code and is stored in a special electronic wallet. Citizens keep non-cash money on an account in a commercial bank, which makes a digital record about this, the Central Bank said in a report.

The issuer of the digital ruble is the Central Bank, and the commercial bank that opened the account is responsible for maintaining and maintaining accounts, transactions with records on them.

The digital ruble can be used to pay both online and offline without the Internet, the regulator points out. Non-cash money cannot be paid if there is no network connection.

Interest can be charged to a bank account, in contrast to a cash or digital ruble, the Central Bank writes.

The digital ruble should become the digital currency of the Russian Central Bank, which has all the necessary properties to perform the functions of money and will circulate along with cash and non-cash rubles, the regulator said in a report. All three forms of the Russian ruble will be absolutely equal and equivalent to each other. The digital ruble is definitely not a cryptocurrency, since the Central Bank acts as its issuer, explains Evgeny Yurtaev, co-founder of the Zerion decentralized finance platform.

The fact that the Central Bank is considering the possibility of creating its own digital currency, the head of the Bank of Russia Elvira Nabiullina said in the summer of 2019. The Central Bank will issue a new currency in the form of a unique digital code stored in a special electronic wallet, the document emphasizes: “At the same time, the digital ruble should be designed in such a way as to provide reliable, safe, fast, convenient, accessible for every citizen cash settlements anywhere Russia ".

Citizens will be able to credit digital rubles to their electronic wallets and use them using mobile devices and other media online and offline, but for the digital ruble to function offline, it is necessary to develop special technologies. “The transfer of the digital ruble from one user to another will take place in the form of moving the digital code from one electronic wallet to another,” the report explains. Users will also be able to freely transfer rubles from one form to another. Transactions will not be anonymous - identification is required to complete them, and the data will be recorded on the Central Bank platform, the report specifies.

Why does the Central Bank need a new type of currency

“The Bank of Russia aims to ensure that the system of monetary circulation meets the changing needs of citizens and businesses, and facilitates the introduction of innovations both in the financial market and in the economy as a whole,” the report explains. The use of advanced technologies in the development of the digital ruble will help reduce the costs of settlements and increase financial affordability, as well as open up opportunities for the development of financial services and instruments, according to the Central Bank.

The Central Bank needs the digital ruble to fully control the issue, says Viktor Dostov, chairman of the Association of Electronic Money and Money Transfer Market Participants: “Since now banks can technically issue non-cash money themselves, in theory nothing prevents them from drawing any amounts on their accounts. Although this was rarely seen in practice, with some malicious bankruptcies, such concerns have long been heard.

Not to be confused with cryptocurrency

The digital ruble does not apply to cryptocurrencies, which are de facto prohibited for settlements in Russia. From 2021, the law "On digital financial assets" will come into force, according to which cryptocurrency cannot be used to pay for goods and services.

Since the digital ruble will be money, it is not regulated by the new law. As explained in the report, since, in accordance with the Constitution, the monetary unit in Russia is the ruble, and monetary emission is carried out exclusively by the Central Bank, the digital currency, regardless of the technical implementation of such emission, will also be the official monetary unit. However, for its circulation, it will be necessary to make changes to the Civil

th code to add the digital ruble to the list of objects of civil rights, as well as to the law on the Central Bank in terms of expanding the functions of the regulator and determining issues of issuing and circulating digital currency of the Central Bank.

In recent years, all global regulators have been pondering the concept of digitalizing money and the transition from classic non-cash payments to formats based on new technologies, says Maxim Nalyutin, head of the financial sector services group at Deloitte. The digital ruble will be able to help reduce the cost of issuing money, as well as increase the transparency of the financial system, adds Natalia Rakova, head of the consulting services group for companies in the financial sector of KPMG in Russia and the CIS.

The introduction of a digital currency will require the creation of additional payment infrastructure, writes the Central Bank: this should create incentives for the development of payment innovations in the private sector, and the spread of digital payments will lead to lower transaction costs for the consumer and increased competition among banks.

The emergence of the digital ruble could make it easier for small fintech companies to enter the market, which may compete with large banks for more convenient services, Dostov continues. However, it is too early to talk about the impact of the digital ruble on the payment market, the expert argues: "The digital ruble can become a really popular market only if it provides some understandable advantages, for example, a sharp decrease in transaction fees." For citizens, including those who have limited access to online payments (for example, due to the lack of POS terminals at retail outlets), this can be a good alternative means for payments and p2p transfers (between individuals), adds Rakova.

The possible introduction of the digital ruble will change the financial sector and affect monetary circulation, therefore it is important to assess the impact of digital currency on monetary policy (MP), the report says. For example, the reallocation of funds between bank deposits and digital currency will affect the balance sheets of banks, and may also lead to an increase in interest rates on bank deposits and loans. In addition, with the advent of digital money, the structural balance of banking sector liquidity will change, the authors of the report list.

According to NES professor Oleg Shibanov, in Russian conditions, the possible introduction of the digital ruble is unlikely to affect the policy of the Central Bank. “By and large, this is an analogue of the electronic ruble, which is already present. The only difference is that the digital ruble will be available to companies and households, that is, the Central Bank will communicate not only with banks, but also with ordinary citizens, ”he says. The transformation of the financial system in terms of services and digitalization is ongoing and these processes smoothly penetrate into the main indicators, so the monetary policy always has time to adjust, adds Sofia Donets, economist at Renaissance Capital for Russia and the CIS.

Competition between the Central Bank and commercial banks will not arise "right off the bat", since the Central Bank's rates on the placement of the digital ruble will be almost zero, Shibanov notes: digital money will rather compete with cash than with deposits, because with positive deposit rates, people do not care want to keep their funds in deposits rather than "actually in a digital cache." The digital ruble does not mean an additional issue, the expert adds. Paper money will be exchanged for a new currency and thus taken out of circulation.

Is the calculations safe

The Central Bank is considering three options for issuing a digital ruble - using the technology of a decentralized distributed ledger (blockchain), a centralized ledger or a hybrid type, follows from the report. A centralized ledger is more productive, but less resistant to various kinds of incidents than a decentralized one. The choice of the platform will also influence the methods of ensuring information security.

“From the point of view of information security, digital currency or online payment facilities, subject to simple rules of digital hygiene, are safer than any classical currency,” says Ilya Sachkov, CEO of Group-IB. In general, for the digital ruble (if it is issued using blockchain technology), all the same attack scenarios are relevant as for other cryptocurrencies, adds Sergey Nikitin, deputy head of the Group-IB computer forensics laboratory. These are banking Trojans, phishing, fraud, SIM card reissue.

“The technologies that are used to create and circulate digital currency are already fairly well studied and quite safe,” said Sergey Golovanov, a leading expert at Kaspersky Lab. The emergence of the digital ruble is a logical step for the financial sector, he concludes.