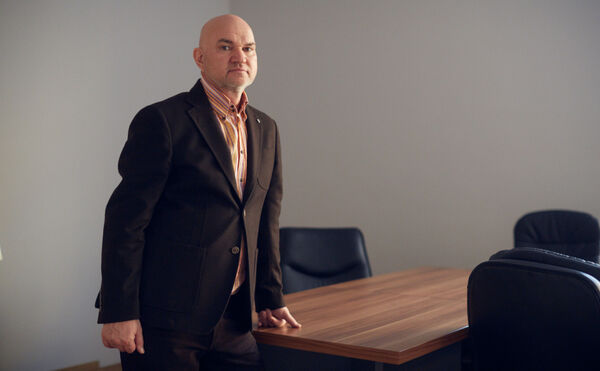 For the second year in a row, a charter air carrier has become a newcomer to the RBC rating of fast-growing companies. Last year it was Azur Air, this year it added Royal Flight. Both airlines are affiliated with Turkish tour operators

We are meeting with the general director of Royal Flight Besiki Kvirkvia at the company's new office near the Sokol metro station. The employees moved here a couple of weeks ago - they felt cramped in their previous office on Leninsky Prospect. For now, in the new place in the corridors there are boxes with things, and the signs on the doors replace the names of departments printed on A4 sheets.

52-year-old Kvirkvia was fond of aviation since childhood. He grew up in the small town of Zugdidi in western Georgia near the Black Sea. Near his house there was a local airfield, where corn workers were based. “I liked watching the corn workers plan, the aviation sphere began to fascinate me more and more, so after the army I received a specialized education,” says the general director of Royal Flight in an interview with RBK magazine. He graduated from the Moscow State University of Civil Aviation with a degree in Air Transport Economics.

Due to the move, there are no curtains in Kvirkvia's office yet, but on the seat there is an attribute from the cockpit - antimakassar (a napkin that is placed on the back of the seat) with the inscription “crew seat”. Before taking over as CEO of Royal Flight, Kvirkvia was the head of the Moscow branch of Donavia, a subsidiary of Aeroflot, for five years. And before that he worked as the director of the VASO airline, created on the basis of the Voronezh Joint-Stock Aircraft Building Company, which produces Il-96 aircraft. "Mr. Putin flies on this," - specifies Kvirkvia.

Until 2014, Royal Flight was called Abakan Avia and was engaged in cargo transportation in Russia and abroad. The airline transported cargo for United Nations missions, food for the military, and was involved in search and rescue operations and medical evacuation. The owner of Abakan Avia was ZAO Corporation Sobol, whose shareholders were six Russian citizens. The same company is listed in the SPARK database as the owner of Royal Flight.

But it seems that the change in the owners of the airline took place in the same year, 2014, when it changed its name and profile of activity, taking up passenger transportation and making its first flight from Moscow to Antalya in the spring of 2014. “We have foreign founders in our friendly country of Turkey,” answers the question about the owners of the Kvirkvia company.

As follows from the information on the official website of the Turkish group OTI Holding, now Royal Flight is part of this group, the owners of which are Ayhan and Ahmet Bektashi, as well as Joshkun Yurt. The airline says that the partner and main customer of Royal Flight is the tour operator Sunmar, which is operated by Coral Travel, which is also part of OTI Holding.

In April 2015, the head of Coral Travel, Joshkun Yurt, said in an interview with RBC that the tour operator has its own airline, it has six aircraft, and its fleet will grow. Yurt did not name the company, but then Royal Flight had just six aircraft, now the company has 12 medium- and long-haul aircraft, all leased (see infographic).

In the first year after the rebranding, Royal Flight flew only from Moscow, then relocated to the regions. Now it makes international flights from about 30 Russian cities - Kemerovo, Krasnoyarsk, Irkutsk, Tyumen, Vladivostok, Blagoveshchensk and others. “60% of our flights are from the regions, because there is high competition in Moscow, there are many airlines,” says Kvirkvia.

The most popular destinations change depending on the season: in spring and summer, Royal Flight passengers fly mainly to Turkey, as well as to Greece and Spain, in autumn and winter, the geography of flights includes India (Goa), Thailand and Vietnam. Turkey remains the undisputed leader - in summer 65–70 flights a week fly to this country. “With all due respect to other countries, children and family vacations in Turkey are best organized,” explains Kvirkvia the popularity of the destination.

Minus Egypt, plus China

Champagne, flowers, a piano - this is how the first Russian tourists who arrived at the Antalya airport after the abolition of the ban on flights to Turkey were greeted. The flight was operated by Royal Flight: there were 332 passengers on board, 100% of tickets were sold out within two days after the start of sales.

At the end of 2015, Russia stopped charter flights with Egypt and Turkey. In October, the charter plane of the airline "Kogalym"

via ", which followed the route Sharm el-Sheikh - St. Petersburg. 224 people were killed, the cause of the crash was a terrorist attack - an improvised explosive device, which was installed in the tail of the plane, went off. And in November, the Turkish Air Force shot down a Russian Su-24 bomber near the Turkish-Syrian border. In addition, since 2014, Russia has experienced a currency crisis due to falling oil prices and the introduction of anti-Russian sanctions due to the annexation of Crimea.

The ban on flights to Turkey lasted a little less than a year; Russia has not resumed charter flights with Egypt until now. “2016 was a disastrous year, it affected our revenue, but we strengthened other areas,” says Kvirkvia. While the most popular resorts for compatriots were closed, Royal Flight increased the number of flights to Greece, Spain and Tunisia, tried to engage in corporate transportation (brought the Metallurg ice hockey team, Magnitogorsk to the game), mastered new destinations (Bulgaria, Croatia), and also managed break into the coveted Chinese market. “China is big, there are a lot of tourists, the interest in Russia is huge,” the general director of Royal Flight smiles.

The first flight of the airline from the special administrative region of the PRC Macao arrived at Sheremetyevo on May 17, 2016. Tourists are taken along a "loopback" route: from Macau to Moscow, then to St. Petersburg, and then back to Macau. Royal Flight receives orders for transportation from a Chinese tour operator, whose name Kvirkvia did not disclose.

Royal Flight received permission to fly to mainland China only a year and a half later, in 2018. “During this time, the Chinese side requests various documents, then makes a decision and issues a certificate,” Kvirkvia describes the procedure. The rules for the flight crew are stricter than in Europe, he complains: for example, airline employees must obtain a Chinese visa.

Outbound tourism from China to Russia in the first half of 2018 grew by 150% compared to the same period in 2017, RIA Novosti reported in August, citing the vice president of the largest travel agency in China, Ctrip, Victor Tsen. According to the Association of Tour Operators of Russia, in 2017, 1.8 million Chinese citizens arrived in Russia, 1.1 million of them indicated “tourism” as the purpose of their visit.

The secret of Russia's popularity among the Chinese is government support for outbound tourism, Gorin says: the Chinese fly to Russia, and also through Russia to Europe. Royal Flight sensed this trend in time and implemented it correctly, he said. True, the share of the airline in this stream is still small - in winter Royal Flight operates one flight a week from China, in summer - two.

“The passengers are very organized,” Kvirkvia describes the Chinese tourists. Each group is accompanied by a "tour leader, acting as a guide and interpreter, as in the Soviet Union." For Chinese passengers, the airline has added Chinese lettering and adapted the menu. “They like to cook themselves and ask for boiling water on the plane: they make soups and drink tea throughout the flight - they carry food mostly with them,” Kvirkvia describes the specifics of Chinese passengers.

Royal Flight has a CAGR of 61% over the past four years, but the business is not calm. “Everything affects air transportation: both the course and political events. We are very sensitive to this, for us all sorts of cataclysms, whether natural, economic or political, are very painful, "says the head of Royal Flight.

After 2014, there was a sharp drop in outbound tourism in Russia, Dmitry Gorin agrees, but in the past two years, the business of companies that specialize in tourist transportation has been growing. In 2017, the number of air flights by Russian companies grew by an average of 18%, while charter flights over the same period grew by 23-40%. “Over the past two years, foreign tourism has been growing, all charter companies have taken advantage of the growth in tourist travel,” Gorin says. The same Turkey set another record in 2018 - 5.1 million tourists flew there in nine months, which is 24% more than a year earlier.