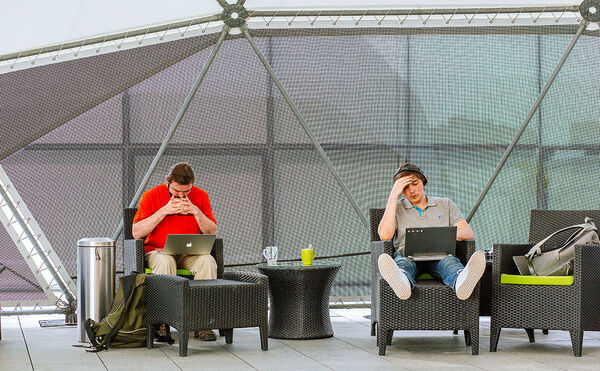 The IT industry has proposed to the government to extend the "tax maneuver" to popular Internet companies. Support is needed in order not to lose to foreign competitors, experts explain

The Russian Association for Electronic Communications (RAEC; among its members - Mail.ru Group, Google, Avito, Rambler, Ozon, etc.) proposed to the government and relevant departments to extend the tax maneuver to IT companies of the digital circuit that provide digital services. This is reported in the final resolution of the Russian Internet Forum 2020, which contains proposals for new measures to support the industry (available to RBC, the authenticity of the document was confirmed by a representative of the association).

The document was sent to Prime Minister Mikhail Mishustin, his Deputy Dmitry Chernyshenko, Deputy Chief of the Government Staff Leonid Levin, Moscow Mayor Sergei Sobyanin, Head of the Moscow Information Technology Department Eduard Lysenko, Head of the Ministry of Digital Industry Maksut Shadayev, as well as a number of deputies and specialized experts. A ministry spokesman confirmed receipt of the letter, declining to comment further. RBC sent a request to other addressees of the letter.

For whom RAEC is asking for new indulgences and whether they need them, RBC figured out.

How the tax maneuver was adopted

In the summer, a law was adopted on a tax maneuver for the IT industry, according to which, starting from 2021, insurance premiums will be reduced from 14 to 7.6% for companies accredited to the Ministry of Digital Affairs (90% of whose revenue comes from the development and sale of software), - from 20 to 3%. At the same time, in order to compensate for the drop in budget revenues, the previously effective zero VAT rate on software sales will be canceled. The privilege will remain only for companies included in the register of domestic software.

For which companies does RAEC apply for benefits

The association refers to the companies of the "digital circuit" as search services, social networks, online stores, online cinemas, etc. According to the RAEC members, most companies in the Internet industry cannot receive assistance from the state, since they do not fit the approved support criteria. So far, only organizations can apply for state support, 90% of whose proceeds come from the development and sale of software. However, Internet companies have a significant share of revenue from advertising, subscriptions to services, sales of virtual goods, transfers of intellectual property rights, etc.

Electronics manufacturers to fall under tax maneuver in IT industry

As noted in the letter to RAEC, developers of electronic document management systems (DocsVision, Kontur, etc.), banking and cash software (Shtrikh-M, Evotor, etc.), creators of CRM systems cannot receive support. (customer relationship management systems, for example amoCRM), etc. “The law will be absolutely useless for IT companies that develop software, but make money on other services: SkyEng, Avito, Yandex.Taxi, BlaBlaCar, Citymobil,“ Netology ". Although they are no less in need of state support than others, ”the letter says.

Representatives of the association warned that a decrease in revenues and profits of Internet companies will lead to a reduction in this market segment, while it will be difficult to replace the departed players due to the "weak willingness of investors to invest" and their lack of "free money". As a result, this may lead to an increase in market share by foreign companies, while former employees of the closed organizations will be employed in foreign companies. According to the RAEC, in 2019 the volume of the market of Internet companies in Russia reached 6.4 trillion rubles, which is 64% more than the results of the previous year. In 2020, according to the association's forecast, the contribution of Internet companies to the country's economy will increase by 15-16%.

In addition to expanding the number of companies that will be able to take advantage of the tax maneuver, RAEC also proposed:

recognize as Russian software developed by companies with foreign shareholders and subject to its creation in Russia (with the assignment of rights to it to a Russian legal entity);

establish a single VAT rate for electronic services of up to 10% (for example, for subscriptions to online services) and apply a zero VAT rate to programs for mobile devices;

postpone the introduction of new digital systems (for example, product labeling) until January 1, 2022, since “in the face of a sharp decrease in turnover, additional costs for ensuring compliance with new regulatory requirements may become critical”;

postpone the mandatory pre-installation of domestic software on computers, smartphones and other devices for the same period;

and a number of other support measures.

In the letter, the RAEC indicated that the "tax maneuver" and other benefits should be extended not only to strategic enterprises and small and medium-sized enterprises.

business, but also to all other IT companies. "Since domestic representatives of the IT industry allow Russia to be one of those countries where local players successfully compete with global foreign corporations, the loss of domestic participants in this market can seriously affect the independence of the local IT market," the authors of the letter believe, pointing out that in this regard, it is necessary to support market participants, regardless of their size.

Tatyana Voytas, Deputy Director for Legal Issues of the Avito online classifieds service, called the measures proposed by the association timely and necessary for the further full development of the industry. “We believe that tax incentives should apply to all companies of the digital circuit, regardless of the type of services they provide or the fact that foreign companies are involved in their capital,” she stressed. Mikhail Platov, deputy general director of the ivi online cinema for legal issues, said he supports the need to take the proposed measures, refusing to comment further.

Representatives of the largest Internet holdings Yandex and Mail.ru Group declined to comment. Earlier, Mail.ru Group reported that, despite the fall in advertising revenue, some segments of its business, such as games and food delivery, saw a surge in demand during the quarantine. Video services and online education services also reported traffic growth.

Oreshkin linked the future of Russia with Internet companies

SkyEng Managing Partner Alexander Laryanovsky noted that the situation is not the same for companies entering the IT industry. For example, SkyEng has it better than many others, the company is the beneficiary of what happened in quarantine. Some companies have had a recession, but, according to Laryanovsky, the best help for such players would be "fixed rules of the game that are not revised sporadically." However, the head of the legal department of the Internet cinema TVzavr, Alexander Rylev, insists that they "are in dire need of state support," as well as the support of copyright holders. “The paid business model of online movie theaters is not a profitable business because of the pirates on the Internet, and the advertising model has suffered from the crisis. The proposed [RAEC] measures are quite diverse and would be very useful for our business, ”Rylev said.

According to Nikolay Komlev, executive director of the Association of Computer and Information Technology Enterprises, only manufacturers who live on the sale of their IT products got the benefits, while during the crisis "everyone suffers and everyone wants benefits." “It makes no sense to divide who suffered the most. This is a deliberate policy of the authorities - to support producers, to preserve and develop this core, ”he said. Komlev recalled that social networks, instant messengers, search engines, gaming platforms and other companies had previously sent their proposals to the government to extend tax breaks to them. He believes that the government will limit itself to removing some administrative barriers, and will not expand the circle of tax benefits.