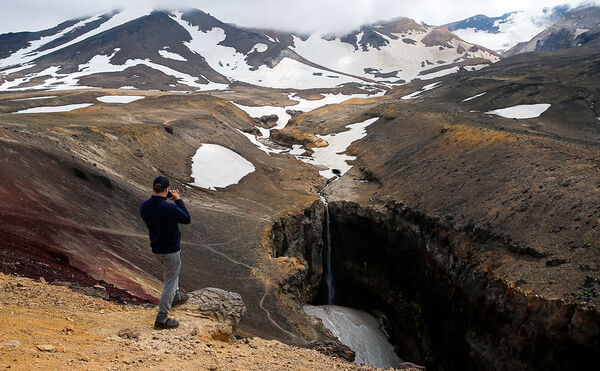 In the absence of international flights, not all Russian regions were able to increase the tourist flow: the regional administration admitted that the peninsula will receive three times less tourists this year than it predicted

By the end of 2020, the number of tourists visiting Kamchatka may turn out to be significantly lower than local officials expected. In January-August, according to the local Agency for Foreign Relations and Tourism, the peninsula was visited by 44.9 thousand Russian tourists, including residents of the region itself, according to the response of the press service of the governor and the government of Kamchatka Krai to the request of RBC. The answer also provides a forecast for the number of Russian tourists that the region expected to receive in 2020 - 120 thousand people.

The number of foreigners who visited Kamchatka in eight months of this year turned out to be one third lower than the forecast due to the borders closed in the spring: 1,000 versus 3,000.

The governor's press service did not specify exactly when the agency made its forecast, but from the answer it follows that this took into account the decrease in tourist traffic due to the pandemic. For example, last year the Kamchatka Territory, according to local statistics, was visited by 205 thousand Russians and 36.3 thousand foreigners. And next year, in 2021, the regional authorities are already counting on 270 thousand Russian and 30 thousand foreign tourists.

Tourists planning to relax in Kamchatka in early July complained about the confusion with the entry: it was originally assumed that the self-isolation regime in the region would last until June 30, and only negative tests for COVID-19 would be needed to enter. But then the acting governor of Kamchatka, Vladimir Solodov, extended the high alert regime until July 15, and all visitors had to go through a two-week self-isolation.

Hotel reservations and tourist reception resumed in Kamchatka from August 13, to enter the region, tourists had to pass a COVID-19 test at the airport, and by September 1, visitors from other regions had to receive electronic passes, which were then canceled.

Kamchatka was one of the top 5 domestic holiday destinations, which, according to the government portal Stopkoronavirus.rf, along with the Black Sea resorts, Altai and Karelia, aroused the greatest interest among Russians. In April 2020, when, at the height of the pandemic, residents of Moscow and a number of other cities were on self-isolation, the Yandex.Travel service also recorded an increased interest of travelers in Kamchatka: the number of tourist requests about this region increased by 77% compared to April 2019. Yuri Dud also drew attention to Kamchatka as a new internal direction with his film, which has gained 10 million views since June.

Traveling to Kamchatka was popular with Muscovites this year, says Igor Blinov, director of development for the OnlineTur.ru travel agency network. According to him, if earlier tours there were sold haphazardly and rarely, this year clients applied for the selection of individual vouchers. TUI began to book tours to Kamchatka in June, and the demand turned out to be twice as high as last year, a representative of the tour operator said.

In Kamchatka, the tourist season ends in September-October, and the results of nine months are almost identical to the results of the whole year, says Sergei Romashkin, general director of the Dolphin tour operator. He reminds that Kamchatka is one of the most expensive domestic destinations: the cost of tours for a resident of the European part of Russia starts from 100 thousand rubles. for a week (with flight), and popular helicopter excursions to the Valley of Geysers from Petropavlovsk-Kamchatsky cost 40 thousand per person.

The flow of tourists to Kamchatka this year, according to Dolphin estimates, dropped by 30–35%. In August and September, the occupancy of hotels could exceed last year, but this did not compensate for the forced lack of demand in the spring and early summer, explains Romashkin.

This direction was negatively affected by the lack of cruises, but part of the inbound flow was replaced by Russian tourists, many of whom visited the region for the first time, the representative of Rostourism noted.

As it was in other regions

In general, the fall in domestic tourist flow was from 15 to 50%, Romashkin estimates, explaining that a successful summer season should last three months, and due to restrictions related to the pandemic, some regions were able to receive only half of the tourists.

The decrease in tourist flow was confirmed by RBC in the administration for the development of tourism and resort activities of the Altai Territory: due to the pandemic in eight months of 2020, it decreased by 36%: 640 thousand people against 1 million a year earlier.

Taking into account the current situation, the summer tourist season can be considered successful, the representative of Rostourism believes. The department emphasizes that the reduction of business and events

The increase in tourist flow in big cities was partially offset by the increased demand for outdoor trips, and the regions traditional for summer vacations received guests with a higher bill.

Karelia has not lost tourists this year, the press service of the Ministry of Economic Development of this republic answered RBC's request: about 700 thousand people visited the region in January-August - almost the same number as last year. The flow of tourists poured in after the removal of sanitary and epidemiological restrictions: over the summer, 20% more guests arrived than a year earlier - this is about 350 thousand people, most of them from Moscow.