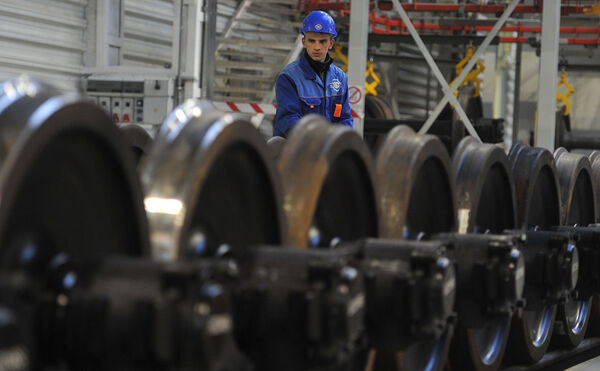 Wagon operators asked Deputy Prime Minister Andrey Belousov not to restrict the import of railroad wheels from Ukraine. The reason for possible restrictions is weak demand due to the increased number of unused cars

The Union of Railway Transport Operators (SOZHT; the union includes Neftetransservice, Rusagrotrans, Federal Freight Company, TransContainer, First Freight Company, etc.) appealed to First Deputy Prime Minister Andrei Belousov, in charge of transport, with a request not to impose restrictions for the import of railway wheels from Ukraine. This is stated in a letter sent to Belousov by the chairman of the UCLT presidium Igor Romashov on October 13. The letter is at the disposal of RBC, its authenticity was confirmed by a representative of the union.

The letter was sent on the eve of a meeting on prices for railroad wheels, which, according to a RBC source in one of the operators, Andrei Belousov will hold with market participants on October 14. RBC sent a request to the representative of the First Deputy Prime Minister.

Why operators are against import restrictions

According to the head of the wheel production facility in Russia, the wheel production market in Russia is “an oligopoly with two major manufacturers - Evraz of Roman Abramovich and partners and the United Metallurgical Company (OMK) Anatoly Sedykh, - occupying more than 80% of the market, which, even with a decrease in demand, continue to dictate price conditions ".

Last week, RBC's sources reported that the Ministry of Transport proposed to ban the import of Ukrainian railway wheels and a decision on this could be made before the end of 2020. The reason for the possible introduction of restrictions is that the demand for wheels in the Russian market began to weaken from the fourth quarter of 2019. This was largely due to the increased number of cars that are temporarily unused, and the capacities of Evraz (510 thousand units) and OMK (850 thousand units) are sufficient to fully meet the needs of the domestic market. Until January 21, 2021, Ukrainian wheels are subject to an anti-dumping duty of 34.22% of their value imposed by the Eurasian Economic Commission (EEC), but due to a drop in demand in Ukraine, experts have pointed out the risk of dumping from Ukrainian manufacturers.

In a letter to Belousov, the head of SZHT points out that against the background of a decrease in demand, prices for railroad wheels fell from 80–100 thousand to 60–65 thousand rubles. apiece, but this is twice the level of 2018.

According to Romashov, during the period of the pandemic, the rates of operators and the production of wagons decreased by half, and the share of railway wheels in the cost of a new wagon was 16-17%. In 2018, it was at the level of 7-8%. In this regard, he asks Belousov to create conditions for the free circulation of these products.

A representative of one of the members of the CLS, TransContainer, confirmed that prices, despite the decline since the beginning of 2020, did not reach the level of 2017-2018.

What happens to wheel prices

In July, the Federal Antimonopoly Service (FAS) decided that OMK's subsidiary in 2019, occupying a dominant position in the market with a 53% share, took a number of actions in conditions of deficit, which led to an increase in prices for railway wheels by more than 40%. An OMK representative told RBC that the company did not agree with this decision and filed documents to challenge it in court.

OMK owner Anatoly Sedykh, in a letter to the head of the Ministry of Industry and Trade Denis Manturov, substantiated his disagreement with the FAS conclusions, Kommersant wrote (RBC also got acquainted with his letter). He claims that the service "arbitrarily" set the maximum price for wheels at 49-52 thousand rubles. when the market is more than 80 thousand rubles. He also noted that a month after the publication of the FAS decision, the company received claims from its clients for damages due to the purchase of goods at a monopoly high price for 3 billion rubles.

This approach has negative consequences for various sectors of the economy and for entities with a market share of more than 35%, therefore it requires attention and competent assessment both at the state level and within the business community, the OMK representative said. RBC sent a request to the Ministry of Industry and Trade, FAS and Evraz.

According to Oleg Moskvitin, Deputy Director of the Institute for Competition Policy and Market Regulation at the Higher School of Economics, it will not be easy to challenge the FAS conclusions regarding the solid-rolled wheel market. For a possible legal challenge, it is important that the FAS analytical report contains a description of the research stages provided for by law and conclusions about each of them, says Moskvitin, noting that the FAS commission did not limit itself to considering the qualitative characteristics of the market, but analyzed the structure of commodity flows and the interchangeability of goods, changes in the shares of market participants as well as levels of barriers.