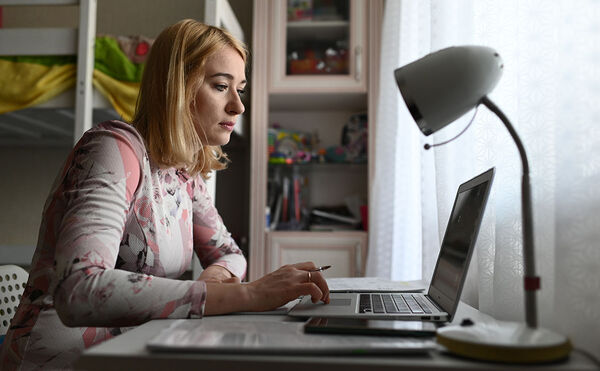 The majority of employees are ready to combine work in the office and from home after the removal of restrictions, according to a survey conducted in several countries. But only 11% are ready to remain completely remotely, and in Russia - half as much

Employees want to preserve many of the advantages of the work regime, which was introduced in connection with the coronavirus pandemic, a survey commissioned by the technology company Cisco in 12 countries showed (RBC has the results). Before the lockdown, only 5% of respondents worked remotely most of the time, but the survey showed that now 87% are ready to work both in the office and remotely, but at the same time want to decide for themselves where and when they will work.

The pros and cons of the removal and other conclusions of the study are in the material of RBC.

Censuswide, on behalf of Cisco, surveyed more than 10,000 workers in the UK, France, Germany, Spain, Italy, Poland, Russia, UAE, Switzerland, the Netherlands, Belgium and Luxembourg from August 11 to 25, who have worked at home for at least ten consecutive days since the beginning. lockdown. The survey involved employees of enterprises with 2 to 500 or more employees in various sectors of the economy. It studied how work from home is perceived during a pandemic, what workers expect from 2021 onwards, what knowledge and practices they would like to apply in the future.

Pros and cons of remote

Some of the respondents said that they found positive aspects when they started working from home instead of the office: 35% became happier, 32% felt better, 27% became more energetic. 56% said they spent more time exercising daily, 63% said they were better able to manage their mental health and well-being.

At the same time, 22% of respondents admitted that they have become more anxious, 17% - demotivated. According to 37% of respondents, they do not have a full opportunity to organize a workplace at home, since they live with family or friends, 45% find it difficult to organize interaction with colleagues.

However, 57% said they did not see any significant difficulties when working remotely and had already adapted to it. In 2021, respondents expect from their employers:

investments in technological innovations that will help employees become more productive and efficient - this was the answer of 39% of respondents;

improving office security to avoid the spread of coronavirus (38%);

digital skills training in the workplace (32%);

improving cybersecurity in order to reduce the risks of remote work (30%, the amount is more than 100%, since respondents could choose several answer options), etc.

What are the differences in the answers of respondents from Russia

Basically, Russian office workers look at the "new normal" in much the same way as in most European countries, said Dmitry Shuster, director of digital architectures for Cisco. Among respondents from Russia, only 5% worked from home most of the time before the pandemic. At the same time, 79% of employees after opening offices want to decide for themselves where to work and independently manage their time.

At the same time, in Russia, a significantly smaller percentage of people want to stay remote and after the pandemic, without returning to the office at all, Shuster said. If the average for Europe is about 11%, then in Russia it is half as much - 6%. At the same time, there are significantly more workers in Russia than in Europe who believe that there is no "new normalcy" at all and that it is necessary to return to their old life as soon as possible than in Europe - 21% against 13%. “Based on this, we can assume that the office is an important part of the work process for Russians,” said Dmitry Shuster.

In May and June, the NAFI analytical center conducted a survey in Moscow and the Moscow region on the effectiveness of telecommuting and came to the conclusion that workers and employers evaluate it differently. About half of the residents of Moscow and the region switched to remote work during self-isolation. Among them, about 41% noticed a decrease in their own productivity, 15% believe that it, on the contrary, has increased, and 39% - that it remained the same as when working in the office. Those who lost efficiency cited as reasons the difficulty of solving work issues remotely (55% of the respondents answered this way), their relatives prevented them from concentrating (24%), during work they had to be distracted by household chores (22%), etc.

At the same time, only 20% of companies that transferred employees to telecommuting are ready to maintain this format for at least some of the staff after all restrictions have been removed, and 82% of employers announced a decrease in the efficiency of employees when working from home, the NAFI analytical center estimated.

How was the remote control introduced

March 5 in Moscow, and March 19 - across the country was introducedhigh alert due to the spread of coronavirus infection, after which some employers began to transfer employees to a remote work format. On March 30, the Russian authorities completely closed the borders and introduced a non-working day regime, when only banks, pharmacies, and stores with essential goods were open. The restrictions were lifted on May 11. However, after the number of people infected with coronavirus began to grow sharply in September, the mayor of the capital, Sergei Sobyanin, signed a decree according to which, starting from October 5, employers in Moscow must transfer at least 30% of employees to remote work, as well as all employees over 65 years old and suffering from chronic diseases. ... From the same date until October 18, school holidays were announced. On Wednesday, October 14, Sobyanin announced that students in grades 6-11 will study in a distance format from October 19, while students in grades 1-5 will continue their education in the traditional format.